Aside from the obvious — yes, I’m outgoing — this page dives into the details about who I am, where I came from, my experiences and where I’m headed.

Where I Came From
​Growing up in a suburb of Chicago, around a talkative family, I learned the art of communication. Everyone had a lot to say, but I sure as heck always wanted to speak my piece. As I grew up, I realized it was just as important to learn the art of listening.
​
I’m the oldest of three and, naturally, a leader who loves the spotlight. I came across some family home videos recently. Watching those, it’s clear that at an early age, I wanted to be in front of the camera. When I wasn’t in front, I wanted to hold the camera, capturing what was going on around me. In middle school, I auditioned for the school musical. I fell in love with being on stage and interacting with everyone around me — other actors, the crew, the directors, etc. I made it a point to learn everyone’s name and get to know each and every one of them. As I crafted my skills, I was asked in high school to mentor some of the younger actors. It was easily one of my favorite roles and a role I continue to pursue. 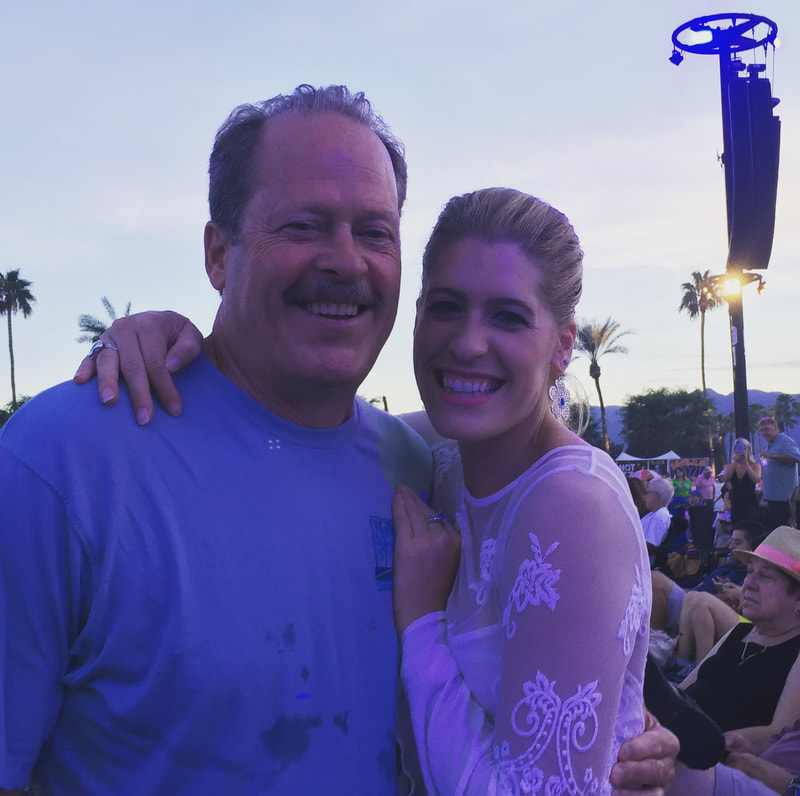 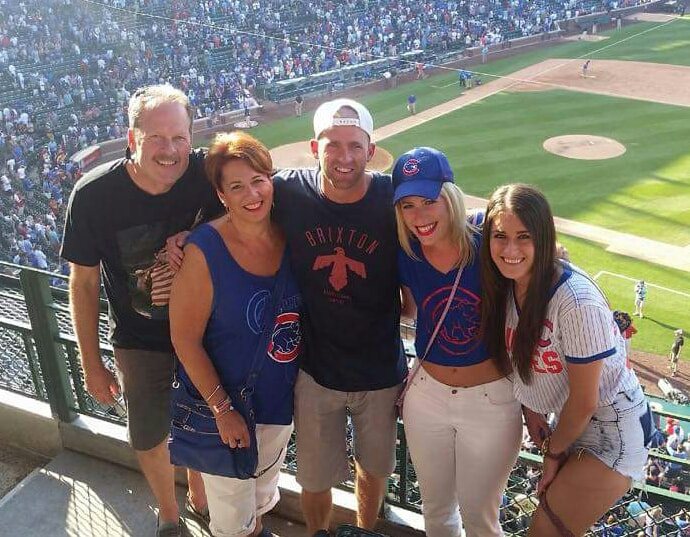 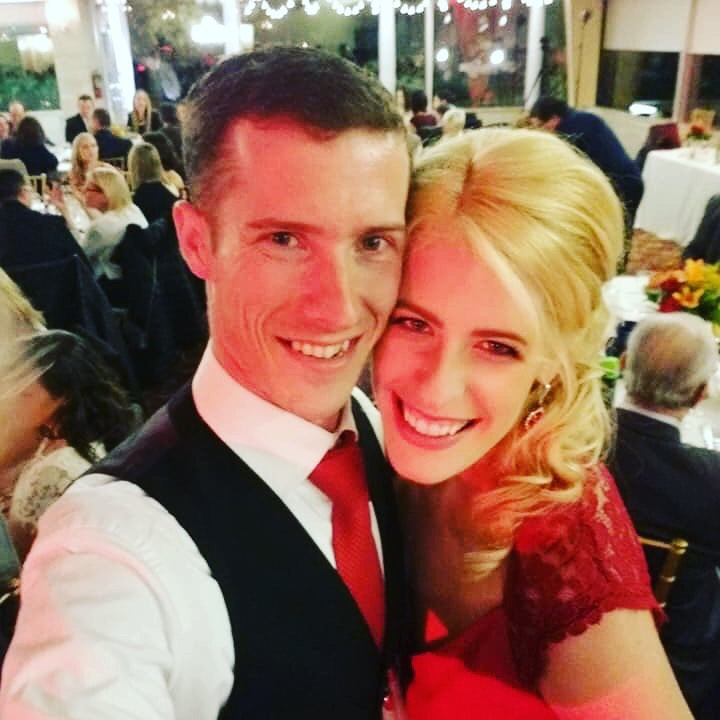 My Experiences
While studying broadcast journalism and Spanish at the University of Missouri, I got involved in a few activities. I sang with the University choir for two years. Senior year, I rallied a group from the TV station and led a team for the local American Cancer Society’s Relay for Life. It was a blast and an honor to spend time raising money to help others in need. Volunteering in my free time, in any capacity, has become one of my biggest missions in life. Side note: I’ve kept up the singing—karaoking with friends, singing in the shower and the car — and I’ve had the privilege of performing and recording in studio with a local duo, The Lonesome Wonderers (look up “Keep Your Love Alive” on Spotify, Amazon and iTunes).

As I began my full-time career in broadcast TV at KMEG 14/KPTH 44 in Sioux City, Iowa, I learned a lot about my love for people. I interviewed politicians, celebrities, business leaders, children, cancer survivors, your average Jane & Joe, etc. Some were delicate and kind, some ignorant or cruel, many generous and loving. Each person I interviewed had a story to tell, and it was my duty and desire to shed a light on these people; get to the bottom of their passions and/or their intent (whether it was good or bad). Talking to people from all walks of life, doing what I could to help, was the best part of my job — and it’s been the core of my career path.

After leaving the TV news business in 2014, I moved to Dallas/Fort Worth to work for an internal communication agency, PartnerComm (“PComm”), as a consulting writer. (Let's call it 'copywriter/project manager'.) PComm runs like an ad agency: I coordinated with other writers, graphic designers, web developers, production coordinators and administrative staff to create and manage employee communication campaigns for Fortune 500 companies (i.e., DHL, United Technologies, Michaels, Alliance Data). If a topic affected employees of our clients, we were likely to write about it. Think: benefits, culture, wellness, retirement, company events, recruiting, retainment, etc. I wrote and managed content on websites and company intranets, wrote scripts and starred in videos, wrote and managed graphic emails and eCards, articles, blogs, social media posts, print materials and more.

Being a project manager included coordinating and strategizing projects with all departments — creating pricing menus based on a client's budget, building timelines and editing accordingly throughout a project's many phases, and generating and modifying billing trackers. I also dabbled in recruiting and new hire training for PComm, teaching myself how to use tools like Indeed, ZipRecruiter, Facebook Jobs, LinkedIn, Handshake and Glassdoor. Along with another senior writer, I created content and co-led new hire training sessions for many of the employees I recruited. As if that didn't keep me busy enough, I co-managed our social media channels and was an advocate for improved employee engagement.

You can check out a PowerPoint called Employee Engagement — an initiative my colleague and I developed to boost PComm’s culture—touching on what the company was doing well and ideas to build an even better PComm.
​
My communication expertise focused mainly on wellness. I was a go-to person for developing websites and videos. For example: our team created a social sharing site for employees and spouses of United Technologies. It was like Facebook for wellness at work and at home You could share pictures, videos, testimonials, recipes and more of, “What Makes You Healthy,” add hashtags, and like and comment on other posts. We tailored the site and collateral for every campaign, encouraging users to post — and we gave away incentives for the top submissions. It was fun and invigorating, and I believe this kind of initiative can be translated in a number of ways. 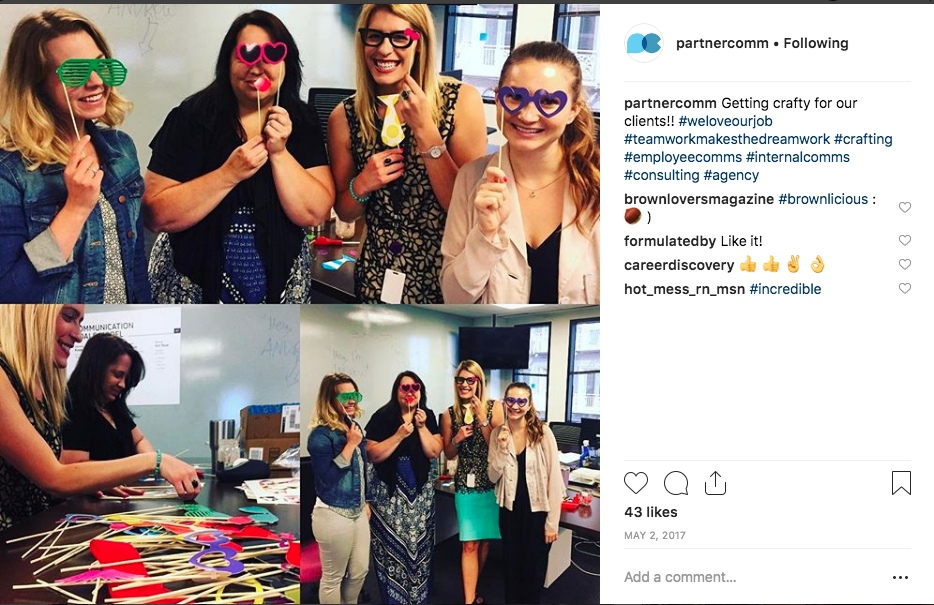 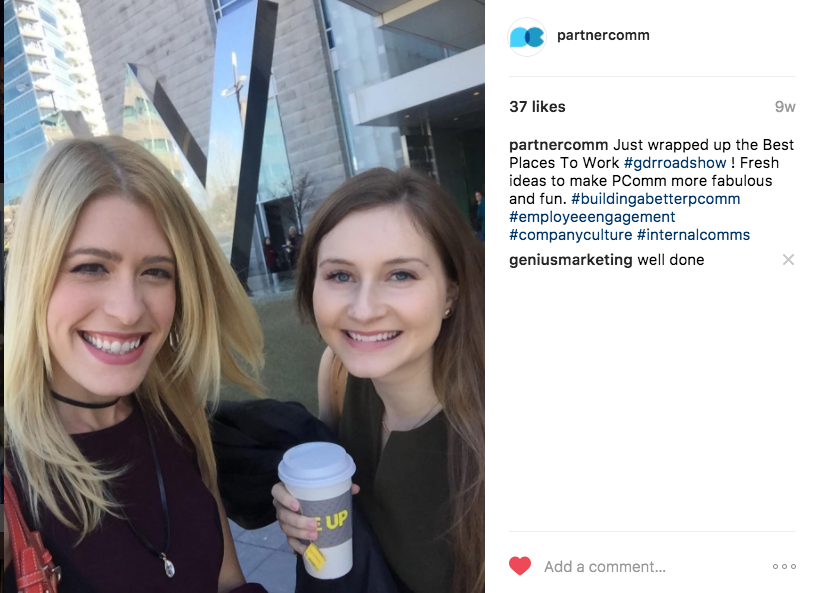 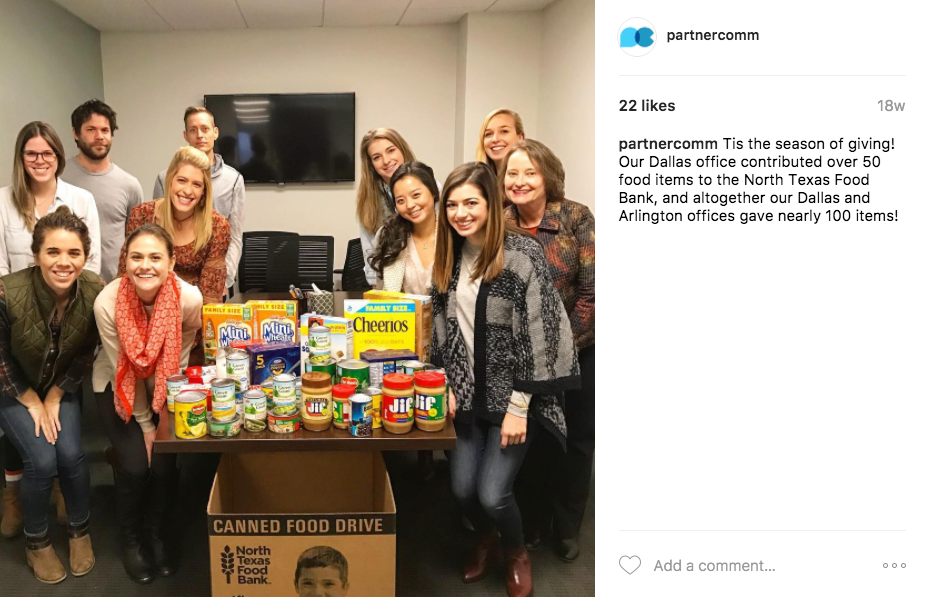 One of my favorite projects was a culture campaign for an unnamed client. (I can’t show samples due to an NDA.) The company recognized the importance of retaining its employees and attracting the best candidates, making everyone feel like they were part of (or could be part of) a great place to work. Our job: create communication announcing new initiatives crafted to cultivate the best culture possible. We’re talking about flexible PTO, a work from home program, sabbatical for director-level tenured employees, monthly progress check-ins with your manager (instead of the typical year-end reviews) and more. This culture shift is something I strongly believe in and am thankful to have been part of the team that got the word out.

Our team came up with a superhero character that gave the culture change a name and a purpose. We created a fun video that introduced these new initiatives with the superhero at the center. The company’s leaders traveled to offices and hosted road show events to roll out the campaign. We created collateral for these events, like emails, banners, a photo booth backdrop and props. We also developed an interactive website that explained these changes in an innovative way. With supporting documents for managers and employees, the site also hosted photos from the road shows. It was a huge success that gained tons of positive feedback.
​
The many hats I wore for PComm conditioned me to develop better time management skills, meet demanding deadlines and work successfully with high-level company leaders and teammates from varying backgrounds (and personalities).

In my free time, I bump, set, spike at the sand volleyball courts in Deep Ellum and have made lifelong friends (and yeah, improved my game, slightly). For two years, I mentored a young girl with Big Brothers Big Sisters and volunteered for a dog rescue. I get together with the #ispeakSpanish Meetup to practice Spanish in a social setting. ¡Que divertido! Mostly, I've been an active member of the Dallas Junior Chamber of Commerce (DJCC) for three years and counting. With my communication background, I've been a part of the growing social media team and done event planning/live coverage for several occasions. It's an organization near and dear to my heart that's been the foundation of my social and networking life in Dallas. (Fun fact: I met the love of my life, Patrick, through the DJCC!)

Not to toot my own horn, but I like to think I’m a Jane of all trades! I’m passionate about education, communication and social media, culture and wellness, and mostly people—always ready to take all of my experiences to the next level. 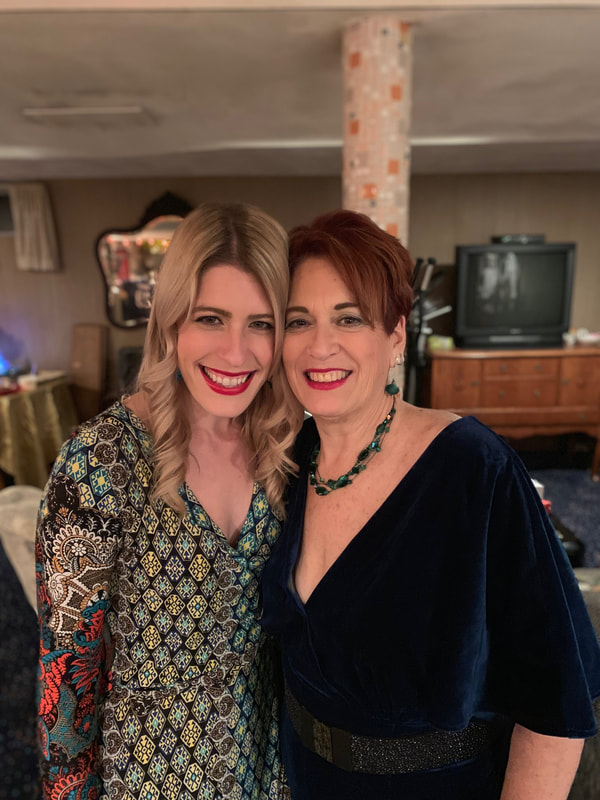 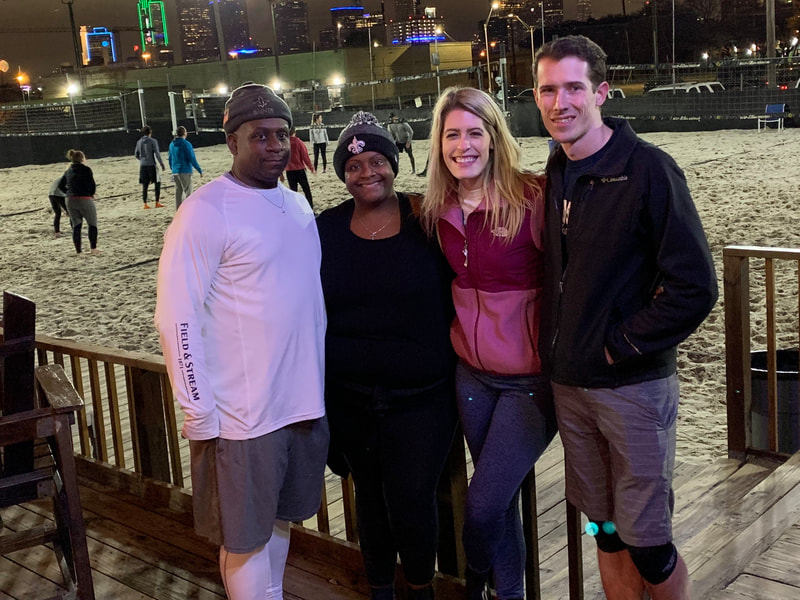 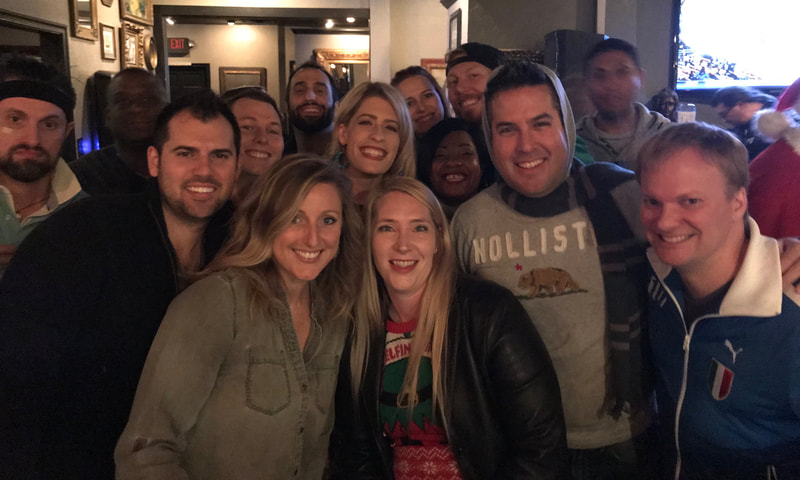 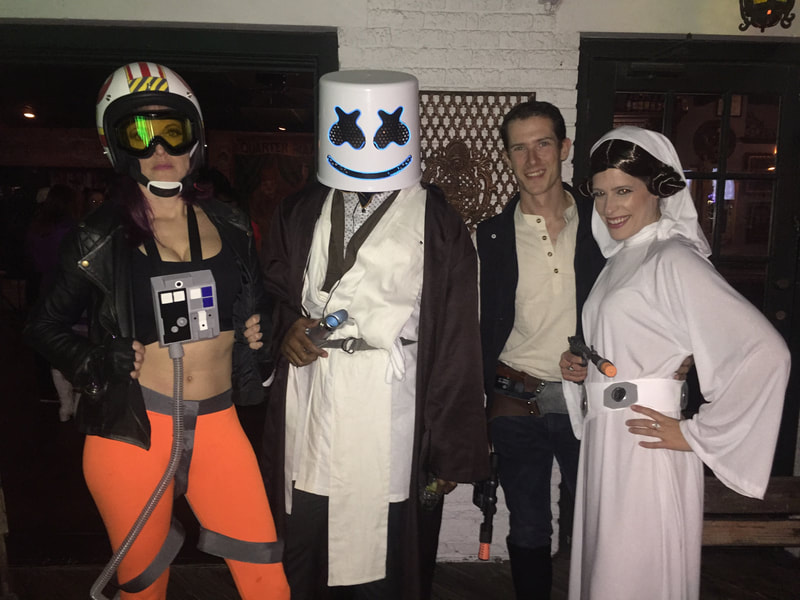 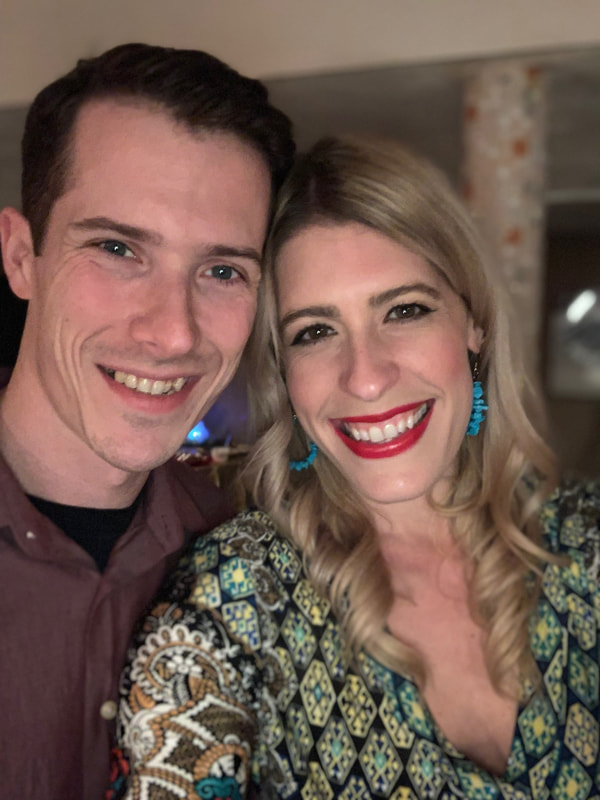 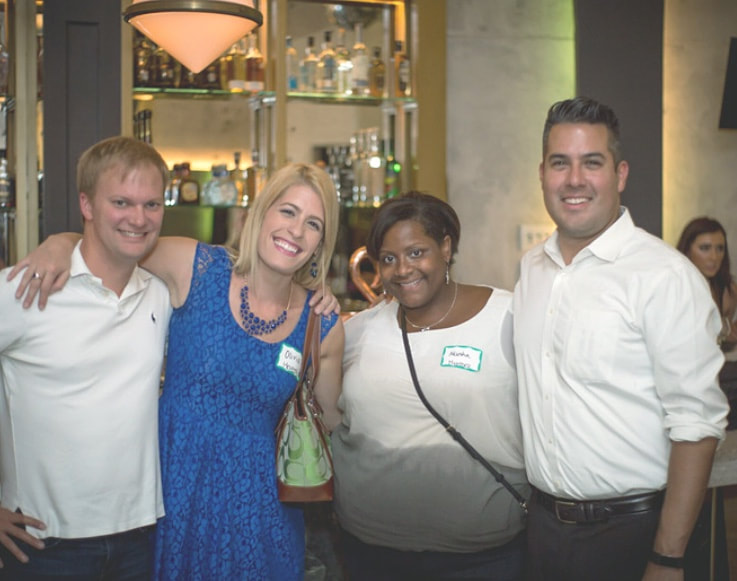 Where I’m Now... and Where I'm Headed
My time at PartnerComm ended in April 2018 due to personal reasons. My dad passed away in November 2016, then my mom got very sick in early 2017. I took a long, hard look at my work/life balance and realized my priorities needed to focus on my family. I moved back to Chicago in August 2017 and worked part-time for the company until I could no longer juggle the job and family, having picked up two additional part-time jobs. I decided to keep those low-stress (somewhat) gigs while my family and I helped tackle my mom’s illness and sell her house. She’s in good health now (got a liver transplant!) and we sold the house — thanks be to God!

Looking back, those challenges have made me a stronger, more resilient person, both personally and professionally. My former boss said it best, “You can think on your feet and speak. Not many people can do what you do. You will be successful wherever you go.”
​
I moved back to DFW, TX in September 2018, searching for the next best career opportunity. After a long and difficult job hunt, I found an amazing job with an incredibly forward-thinking creative agency that focuses on a people-first culture. As of January 2019, I manage the Learning, Education & Development program for The Marketing Arm (aka 'TMA'). Learn more about my role here.

​I hone my Outgoing Olivia ‘people-personality’ and continue to grow among talented, fun, hard working people. I’m a strong leader and a great teammate, and am thrilled to be part of an evolving industry and phenomenal company that shines a light on our people who cultivate our culture. Our motto speaks volumes: "Creativity That Matters." I strongly believe we all bring our creativity to work and whatever we do, whatever we say, should and does matter.